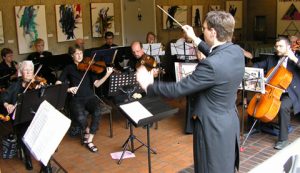 Nova Musica is a non-profit registered charitable organization that was established in 1982. The society’s mission is to provide opportunity for adult amateur musicians in the Edmonton community to continue to develop their musicianship through performance and instruction within an orchestral ensemble, and to produce accessible and affordable public performances open to varied Edmonton and surrounding area community audiences. Nova Musica orchestra members represent a wide diversity of ages, professions, and musical training. They are devoted to their passion for creating quality symphonic music, and have been committed to providing community service and outreach concerts (senior and care facilities) for over thirty years. With an average of six concerts per season, Nova Musica has provided well over one hundred concerts with local communities. The ensemble rehearses weekly during their annual September to June performance season.

We have had a long line of distinguished conductors beginning with Mr. Richard Caldwell, a violinist with the Edmonton Symphony Orchestra. Richard helped to found the orchestra and conducted for ten years getting us off to a good start. During the four years under the direction of Mr. Ed Staples, the orchestra continued to grow. Ed’s background in music and administration (Music consultant for EPSB) taught us to work and listen together. Mr. Bill Dimmer, a trumpeter with the Edmonton Symphony Orchestra, conducted us for three years. Bill gave our orchestra a wonderful sense of musicality. Under the direction of Mr. Blyth Nuttall our orchestra explored new performance avenues, which brought us together with choral and dance groups. Trumpet player, composer, and conductor Joel Tomlenovich was born and raised in Saskatoon. He received his Bachelor’s Degree in Music Performance from the University of Saskatchewan. Joel conducted Nova from 2000 to the spring of 2008 and composed a wonderful piece to celebrate Nova’s 25 anniversary in 2007. Bill Dimmer returned to conduct Nova in 2008 and is our current music director.