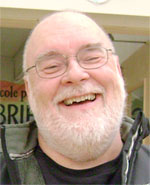 Bill Dimmer is music director and conductor for Nova Musica. He was Assistant Trumpet in the Edmonton Symphony Orchestra since 1971 and retired from the ESO in 2015.  He is a graduate of the University of Calgary and has studied in Denmark with members of the Royal Danish Orchestra and in Chicago with members of the Chicago Symphony.  He has performed with the Tommy Banks Band and with several other performing organizations as player and conductor, including the Plumbers Union (a recorder group which gave a Command Performance for the Queen during the 1978 Summer Commonwealth Games).  Bill has also been active as an adjudicator and conductor.

Bill is host/narrator of the ESO’s Educational Concert series, former Director of MusiCamrose (a residential summer music workshop) and has been on faculty at The University of Alberta, Grant MacEwan College/Alberta College Conservatory and Concordia College.

Bill is also a pilot and flies with and is Zone Commander for Civil Air Search and Rescue Association (CASARA) Edmonton.